In these Covid days, it is very common to see maps comparing the situation in different EU member states.

Here’s another map, but this one is not about Covid.
. 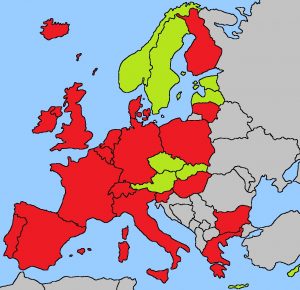 You will notice that much of the map is red. There are just a few countries that are green, including the Czech Republic.

Can you guess the significance of the colours?

The red countries are ones which have Estate or Inheritance taxes. The green countries do not.

What is Inheritance Tax?

How Much is it?

The rate of tax varies widely from country to country and also depends on how much money the person has. Some rates are quite low. Others are much higher. Here are some examples of some of the higher rates in the EU:

So as you can see, these rates can be extremely high.

As the map shows, inheritance taxes are very popular with governments. There are a few reasons for this:

How are Inheritance Taxes Introduced?

When inheritance taxes are introduced, they are almost inevitably done without any advance notice. The reason is that it is important not to give people time to reorganise their affairs (e.g by giving everything to the children) before the new tax takes effect.

They also come with ‘anti-avoidance rules. The most common is a tax on gifts, again to stop people giving things away to children or putting them in trust in order to avoid the new tax.

What is the likelihood of the Czech Republic re-introducing Inheritance Tax?

We do not have a crystal ball or any special sources of information, but we would rate the likelihood of an inheritance tax coming to CZ and now quite high
First, the Czech Republic had inheritance taxes at a relatively low level until 2013.
Second, as we all know, the Covid Pandemic has had an enormous negative impact on Government finances. They now have a big hole that they need to fill.
Inheritance taxes must seem like an incredibly tempting way of doing that.
By the way, you might be thinking that this particular government is not that likely to introduce such a tax, but perhaps it is worth remembering that our current Prime Minister already has much of his wealth in trusts

What can you do to protect yourself?

Internationally, one of the main uses of trusts is to protect families against inheritance taxes. Remember that once your assets are in a trust, they are no longer yours. That means that they do not form part of your inheritance. The very best time to put your assets in a trust is before the new tax comes into force.

It may be that you have already been thinking about setting up a trust for some other reason, for example:

It may also be that you have been procrastinating or that you are in some other way “stuck”.

If you are, then we strongly encourage you to get on with it and move forward with your new trust.

Once inheritance tax arrives, it will be too late!